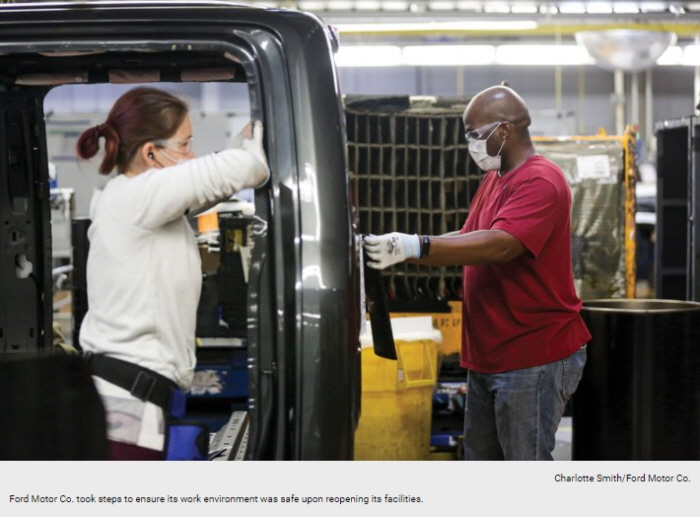 For automakers and suppliers, the last year wasn't just about getting through the COVID-19 pandemic. It was about coming through it stronger and wiser, changed for the better.

That may have seemed like an impossible task when the virus began its global spread, shutting down businesses and entire countries, and slowing global industries. Even as the auto industry faced big challenges, it found innovative ways to address emerging concerns. 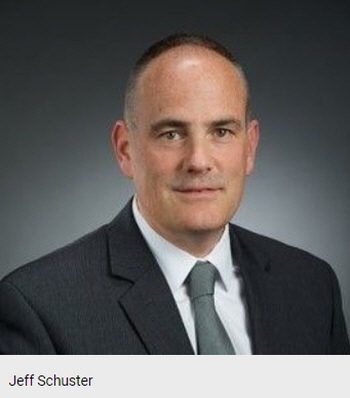 "The industry innovates and finds ways to deal with whatever the situation is," he said. "I think, when there is an event like this, the industry and society tend to come out stronger and really know that they can fight through anything."

Coming into 2020, the auto industry expected to see unit sales of about 17 million in the U.S. and 90 million globally, according to Schuster. The pandemic put a dent in those expectations, particularly early on when production levels plummeted.

At one point in the spring, U.S. auto production fell to nearly zero, Schuster said, adding that global production levels fell by 60 percent.

But things picked up in the second half of the year, and the market quickly rebounded. By the summer, U.S. automakers not only had revived production, they skipped their traditional summer shutdowns to make up for lost time.

"So we do see continued recovery," Schuster said. "Things are better than expected, considering we had a pretty significant drop (in production)."

What bolstered the industry during the toughest points of the pandemic was an unwavering demand for new vehicles. Yes, sales trailed off when dealers were forced to close their doors during lockdowns, but new vehicle sales surged upon reopening. 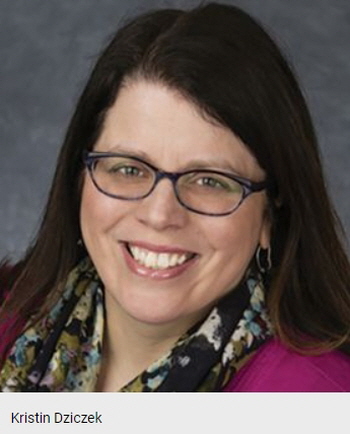 "Sales, overall, were much stronger than we thought they would be (early in the crisis)," said Kristin Dziczek, vice president of industry, labor and economics at the Center for Automotive Research.

By the end of 2020, North American vehicle sales reached 14.5 million and global auto sales hit the 78 million mark, according to LMC data.

Road to recoverySchuster remains hopeful that the industry will continue its recovery trajectory, though he said it may take a few years for unit sales to reach or surpass pre-pandemic levels. LMC Automotive is projecting sales of around 16 million in North America this year, about 1.5 million ahead of 2020.

This year stands out as a pivotal one for other reasons, too. The ability to contain and control the spread of the coronavirus also will determine the pace at which the auto industry recovers. That's because the vaccine rollout and the U.S. government's latest stimulus response remain key factors for holistic economic recovery.

In many ways, the outlook for this year "depends on if you are a glass-half-full or glass-half-empty kind of person," Dziczek said. 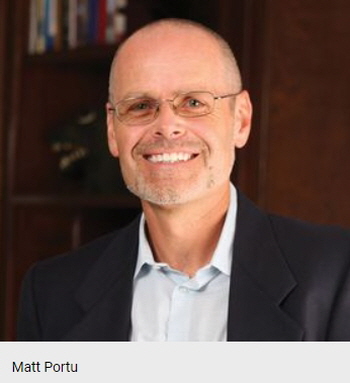 Count Matthew Portu as one of those glass-is-half-full people. As president of Freudenberg NOK Sealing Technologies, he's encouraged by the recovery his company has experienced since the second half of 2020. He expects the recovery to continue fairly smoothly, barring any major hiccups.

"I think we are nipping at full strength right now. We are very close," Portu said.

"Early in the crisis, it was assumed and universally thought that we would not return to normal until 2024 or 2025. We had these thoughts as well, and the reality was nobody really knew. We certainly started to see a robust recovery happening, first in China and then in Europe and then in the U.S. I think we are really very, very close to being back to a 'normal' and healthy automobile sector."

That's not to say that there won't be additional hurdles along the way. The industry-wide microchip shortage already is posing problems for auto production.

The root of the issue, Dziczek said, is that the pandemic created a demand for consumer electronics, which increased demand for the chips, many of which also are used in vehicle electronics. Shifts to remote work and remote learning led to a surge in purchases of office electronics, desktops and laptops.

Stay-at-home orders also led to increased demand for entertainment electronics such as video game consoles. This surge was compounded by the release of some newer, in-demand consumer electronics such as the Play Station 5 and the latest Apple iPhone.

"Everyone tricked out their home office or home school space, and that had a big impact on demand," Dziczek said. "Shifting that demand back to the auto industry is going to take some time."

Schuster agrees that the microchip shortage will remain a hurdle for the auto industry moving forward, but he does not see it as being a long-term issue.

"That may not have a lasting impact," Schuster said of the chip shortage. "But it is going to cause some disruption in the structure of the recovery path in the spring and into the summer."

The pandemic did expose the strengths and weaknesses within the auto industry. Every company along the supply chain wrestled with big problems and the industry, as a whole, tackled some together.

"I think the (industry's) strengths and weaknesses are the same thing," Dziczek said. "Depending on what context you are in determines whether (something) is a strength or a weakness."

For instance, the global supply chain, which had been a critical strength of the auto industry, just wasn't a strength in 2020. Early in the pandemic, components makers couldn't produce what was needed due to parts shortages or shutdowns. At other points, shipping complications prevented completed parts from getting to the auto makers.

Dziczek does not believe the pandemic will change how auto makers view their supply chains — it will remain a global industry, sourcing parts from around the world.

"It has always been a strength to have many eggs in many baskets," Dziczek said.

Portu noted that the complications experienced during the pandemic went far beyond typical supply chain disruptions and likely will not be replicated often.

"This was different — noticeably different — in that everybody was in the same boat at the same time," Portu said. "Typically, you have one segment that might be impacted or one supplier or one OE. But this was everywhere; it was happening to everybody very rapidly."

It is likely that, moving ahead, the auto industry will have a better idea of how to approach major supply chain disruptions that occur simultaneously. It likely also will have a plan for addressing shortages.

Schuster speculated that in the months and years ahead, OEMs and suppliers will rethink what it means to run lean operations.

"The industry has been running quite lean, which has been considered healthy," Schuster said. "When you're running lean, you have to adapt quickly if things decline, but it also means when there is something like this and you don't have production, you don't have enough of a buffer to handle that." 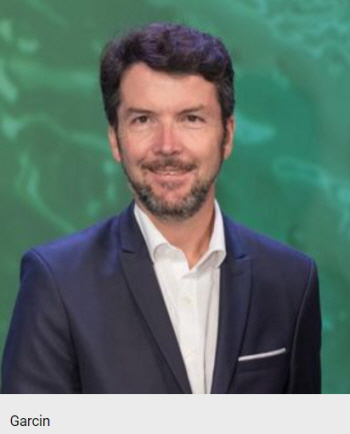 Michelin North America Inc. saw 2020 as a chance to adapt and position itself as a leader in a newly defined automotive landscape.

"The last 12 months have been really, for us, a transformation," Alexis Garcin, chairman and president of Michelin North America Inc. told Automotive News recently. "We have been transforming ourselves quite a lot in the way we work with a lot more work from home."

Internally, the biggest changes for Michelin came when the company was challenged to examine how it communicates. With in-person visits and meetings sidelined, the company, like many others, turned to technology as a way to connect.

"Before the pandemic, our internal communication with employees was 80 percent top-down through monthly or quarterly meetings," Garcin said in an email to Rubber & Plastics News. "So, we completely flipped our approach and began to reserve 80 percent of our time to answer employees' questions, and on a much more frequent basis — weekly — via company-wide town halls."

FNST experienced much of the same when it came to communication. Portu said that was a direct result of the company's ability to harness technology in new and effective ways.

"In a strange way, I would say that our collaboration actually increased throughout this time," Portu said. "We were forced to pay attention in meetings—that's not to say that we didn't pay attention before, but this was different. It became more difficult to focus, so we had to be more creative and more innovative in collaborations."

From the start, FNST responded to the crisis in the way many businesses did. Those employees who could transition to work remotely from home did so. This allowed FNST to close office spaces, limiting possible community transmission.

As much as possible, Portu said, FNST tried to keep its manufacturing operations going without disruption. As industries around the globe ground operations to a halt, that became more difficult.

During the end of the second quarter and into the early part of the third quarter, the company was among those to implement furloughs. The good news, Portu said, is that FNST has rebounded quickly. All of those furloughed employees have returned, and operations are running at or near pre-pandemic levels.

To best protect its employees, FNST implemented safety practices across all of its facilities to ensure workers could return to work. These measures included temperature checks, social distancing and wellness checks.

Portu said he is proud of the fact that none of the North American operations were forced to close as a result of a COVID-19 outbreak. And while there were employees who contracted the virus, there is no indication of community spread at work, he said.

"In all of our tracking, we never found a case that we believed was transmitted within our facility," Portu said. "It tended to be from the normal day-to-day things that happen when you are out and meet people or have contact with someone in your inner circle who is sick."

Portu believes the ability of his company to weather one of the toughest years in recent memory is the direct result of the people who make up the FNST family.

"A lot of companies would say that your employees are your most important asset, but it's really true," Portu said, noting every employee across the North American operations stepped up and did what it took to pull through the difficult time. "This crisis really put a spotlight on our team, and everybody could feel we were in a pretty tough spot, so it naturally became an all hands on deck type thing."